Join us for a tour led by our Docents. 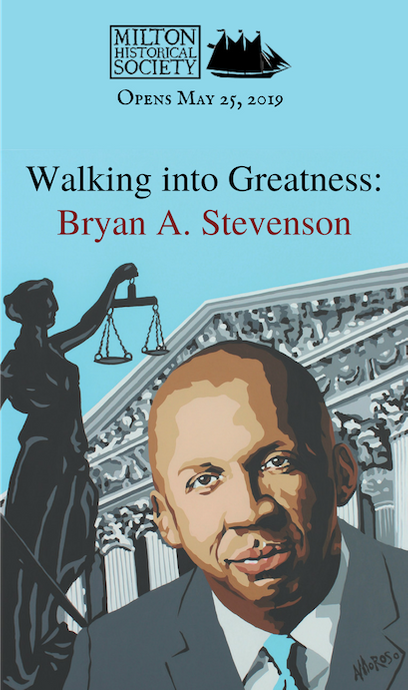 The Milton Historical Society Board of Trustees presents “Walking into Greatness,” a hometown hero exhibition about the internationally acclaimed public interest attorney and best-selling author Bryan A. Stevenson. Presented as a timeline, the show puts Stevenson’s personal and professional history into local and national contexts as it traces the magnitude of social change that has taken place during his lifetime. The exhibit is on view in the Lydia B. Cannon Museum Annex from May 25 – December 2019 on Wednesdays from 1-4 pm, Thursdays – Saturdays from 11 am-4 pm, and Sundays from 12-3 pm. Tours of the exhibit are offered on Fridays at 11 am, Saturday and Sunday at 1 pm, and by appointment.

Born in Milton in 1959, Stevenson’s family and community helped shape his calling for public service. After attending the local “colored” Milton Public School 196C, Stevenson was part of the desegregating classes in the Cape Henlopen School District. He went to Milton Elementary and Junior High School and graduated top of his class from Cape Henlopen High School.

After college at Eastern and graduate school at Harvard, he founded the Equal Justice Initiative (EJI) in Montgomery, Alabama, where he has dedicated himself to providing free counsel to those most in need of legal representation. As of 2019, Stevenson and EJI have won relief for more than 145 death row prisoners by overturning their convictions or death sentences. In his efforts to champion children sentenced to life-in-prison, Stevenson and EJI have successfully argued a number of landmark cases on the United States Supreme Court level that have changed Federal laws so that it is now illegal to sentence juveniles to die in prison. Most recently, his U.S. Supreme Court arguments won relief from the death penalty for prisoners with dementia or cognitive impairment.

Beyond the courtroom, Stevenson is author to the bestselling book Just Mercy: A Story of Justice and Redemption (2014), which was recently adapted for Young Adult readers. He became a household name after making a 2012 TEDTalk “We Need to Talk About Justice,” and numerous appearances on the television show “60 Minutes.” His latest efforts to raise awareness about social justice on a national scale include the opening of the Legacy Museum and National Memorial to Peace and Justice in Montgomery, Alabama.

Presented as a timeline, this exhibit puts Stevenson’s personal and professional history into local and national contexts as it traces the magnitude of social change that has taken place during his lifetime. While the exhibit is for all ages, it is especially designed to inspire local school-aged children to see their own potential in Stevenson’s powerful example.